I frequently implore my clients to practice database PR (public relations), the practice of communicating data management successes throughout the organization. (You can read more about that here.)

Following is a tremendous example of database PR in action. This comes from Missy Casner, Database Administrator/Developer at the American Camp Association. She took the following steps to boost adoption of their newly upgraded AMS. This is shared with her permission.

Users really don’t embrace change, because they just want the system to work when they access it.

Early on, we sent out an initial email stating our intent to upgrade during the summer 2020 window. Six weeks prior to the upgrade I began my weekly communications with staff. I sent an update every Friday for two reasons. 1) If they don’t look at it on Friday, it will be one of the first that they hopefully see on Monday. And 2) If they are like me, they will look at their emails over the weekend while relaxing and they will see my email.

This time around, I’ve decided to number the emails in the subject line. This is an example of the one I sent out on 6/12.

Email #5 – ACA’s CRM will move to the cloud the week of August 17, 2020! I’m getting ready, are you?  This allows me to quickly look back at an email if they refer to it by number.

I also forward all previous ones in the new one, so they don’t have to look back in their filed emails to refer to something.

I try to limit the topics to no more than two paragraphs. In my mind, less is more or less is read.

But the tactic that is most unique to this major upgrade is that I’m using avatars to help relay the message. I originally planned on just having one in my signature that said, “Bye!” but I decided using them to help relay the intent of the message became important as well. Although I’m not a fan of avatars clouding my social media feeds, I do think they are cool. I started by creating my personal avatar on Facebook. Once I did that, Facebook created a whole bunch of “stickers” with my avatar. So, I have all these avatars with “looks” or “sayings” that actually help me convey my messages. I then applied the stickers to a post, took a screenshot, and then separated them for individual use. If you decide to attempt this, don’t spend days creating these, when the social media apps do it for you! 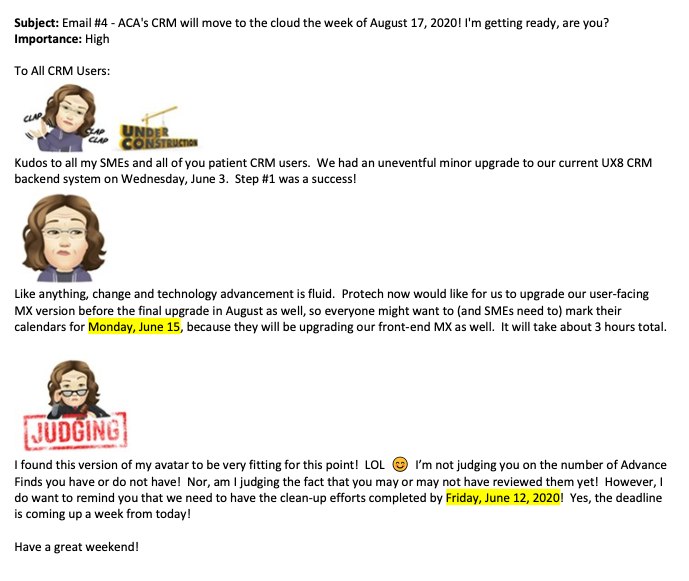 Now I’m getting responses to my emails like, “But the main reason I’m emailing is to say again, your avatar game is strong. Makes your e-mails funner (yes it’s a word) to read.” or “Missy, I love your avatars.” or “Love the avatars Missy!”  So, I know my emails are getting read!

Simply by injecting some humor and interest into her weekly emails, Missy is able to improve the likelihood that her messages are being read. It’s a simple yet brilliant idea.

Are you practicing database PR in your organization?